The Environmental and Economic Impacts of Soil Erosion Soil represents a crucial element in both rural and urban environments. And in both cases, proper land management is key to maintaining soil quality. Even if soil erosion on construction sites usually affects a relatively small area of land, as part of the watershed, it’s still a major cause of sediment. The reason is that the potential for soil erosion during construction is much higher than on agricultural land. Erosion, land degradation, and sediment-related damages can occur both on and off the construction site.

Of the two, however, off-site sediment damage is the most critical issue facing construction sites. Soil erosion, which is the main contributor to sediment pollution, is greatly accelerated when soil is disturbed and left exposed to the erosive actions of wind and water. Unless adequate preventive measures are being taken to control this accelerated and abnormal soil degradation, it quickly becomes the most damaging and visible factor in the deterioration of soil fertility and quality in urban and rural areas.

What Are the Environmental and Economic Impacts of Soil Erosion?

Soil-specific construction activities, such as grading and filling, can have negative economic impacts on soil quality. If left unprotected, construction sites may also be further degraded by soil erosion and start having significant environmental effects. Re-establishing vegetative cover as soon as possible during construction or after construction activity ceases is typically the best way to prevent both the on-site and off-site impacts of erosion.

The On-site Effects of Soil Erosion

When it comes to urban areas in particular, the loss of topsoil due to construction activity can have major negative on-site effects. This can happen either through its actual removal with heavy equipment and/or via wind and water erosion. The top layer of soil holds the highest level of organic matter, plant nutrients, and biological activity, which represent the key components of healthy soil and its ability to sustain plant growth. The loss of soil nutrient and water-holding capacity can have a negative impact on the establishment of future lawns and landscape plantings.

Furthermore, soil erosion left unchecked on slopes and channels adjacent to buildings, roadways and other infrastructure can undermine and destabilize foundations and road bases, causing those structures to fail.  Deep rills and gullies formed by severe erosion are also unsightly and create potential safety hazards on both urban and rural landscapes. Without effective soil erosion, more frequent, and often more expensive maintenance of sediment control structures will be required to prevent excess runoff into off-site areas.

The Off-site Costs of Soil Erosion

Soil erosion from construction sites also has off-site environmental and economic costs. Such erosion can result in two major water quality problems, both in surface waters and drainage systems. These are nutrient and sediment pollution. These two issues have significant adverse economic and environmental effects on water bodies as well as the surrounding communities.

For starters, plant nutrients, specifically nitrogen and phosphorus in sediment runoff generated from construction sites will impact water quality through a process known as nutrient pollution. Also known as eutrophication, it is among America’s most widespread, challenging, and costly environmental  problems. While both nutrients are natural parts of aquatic ecosystems, too high of a concentration can cause uncontrolled algal blooms that the ecosystems can’t handle. This increase in algae and its eventual decomposition can harm habitats, water quality, and food resources, as well as decrease the water’s oxygen levels needed by fish and other aquatic life to survive.

Sediment pollution, on the other hand, reduces water quality by making the water cloudy (turbid), and may carry herbicides, petro-chemicals and other toxins into water bodies. Water turbidity not only inhibits animals from seeing their prey (food), but can also cover and damage nesting areas for fish and benthic organisms. High turbidity  reduces the photosynthesis capability of underwater vegetation decreasing oxygen levels in the water necessary to sustain a healthy aquatic ecosystem. When sediment builds-up in stream and river channels, reservoirs, lakes and ponds, it lowers their water flow and storage capacity, and can even deteriorate boat, ship and barge traffic on large navigable waterways. These effects are often further compounded by upstream construction sites which typically have more impervious surfaces and increased stormwater runoff.This can cause water bodies to receive larger volumes of water than normal, and in shorter periods of time. As a direct consequence, there will be more incidence of flooding in areas that rarely, if ever, experience flooding. Flood-prone areas, however, often require dikes and levees to be built or enlarged to protect local communities as well as any surrounding agricultural land.

Taxpayers will bear the financial costs, which add up to millions if not billions of dollars every year, for dredging waterways and reservoirs,  filtering sediment from turbid water for improved potable water quality, as well as removing sediment from public roads and other areas. Property damage and safety hazards associated with flooding are also huge costs to be taken into consideration. Under the Clean Water Act (CWA), state and local governments typically require project owners, engineers or contractors to develop detailed erosion and sediment control plans before beginning construction. The National Pollutant Discharge Elimination System (NPDES), created under the CWA, also provides a list of Best Management Practices (BMPs)for both Construction and Post-Construction procedures.

It should go without saying that soil will inevitably be exposed during a construction project. Nevertheless, it’s essential that soil exposure is minimized and covered as quickly and as effectively as possible. Various conservation practices can be applied to provide permanent, temporary, or intermittent cover. These can reduce the incidence of soil loss and runoff to different degrees. Supporting practices, such as terraces and diversions, can also change slope lengths and decrease water flow volume and velocity in erosion prone areas, further reducing the negative impacts of soil erosion. Such supporting practices also provide temporary protection for vegetation establishment as well as permanent protection for the site itself.

There are also other conservation practices that can be used in urban construction and erosion prevention. These include the following:

Soil quality and fertility are an often overlooked area of urban infrastructure. Yet, they are critical in regulating stormwater runoff, as well as supporting vegetation. Soil erosion as a result of construction is, in many cases, a serious problem if left unchecked. It can negatively affect both the community and its surrounding environment, resulting in regulatory fines, repair and cleanup costs sometimes well into the millions of dollars. It’s for those reasons erosion must be taken seriously and effectively controlling it must be a priority on most construction sites.  If areas on your construction site require a high level of permanent erosion protection, and a vegetative soft armor approach is desired over hard armor materials, you should seriously consider the InstaTurf Hybrid-Turf Instant Armor erosion control products. 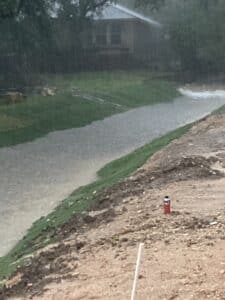 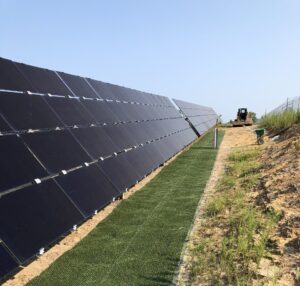